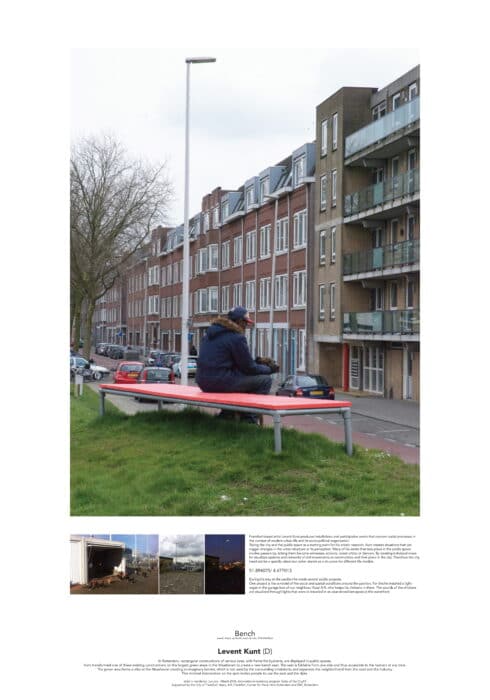 In Rotterdam, rectangular constructions of various sizes, with framed fire hydrants, are displayed in public spaces. Kunt transformed one of these existing constructions on the largest green areas in the Maashaven to create a new bench seat. The seat is foldable from one side and thus accessible to the hydrant at any time. The green area forms a dike at the Maashaven creating an imaginary border, which is not used by the surrounding inhabitants and separates the neighborhood from the road an the industry. This minimal intervention on the spot invites people to used the seat and the dyke. 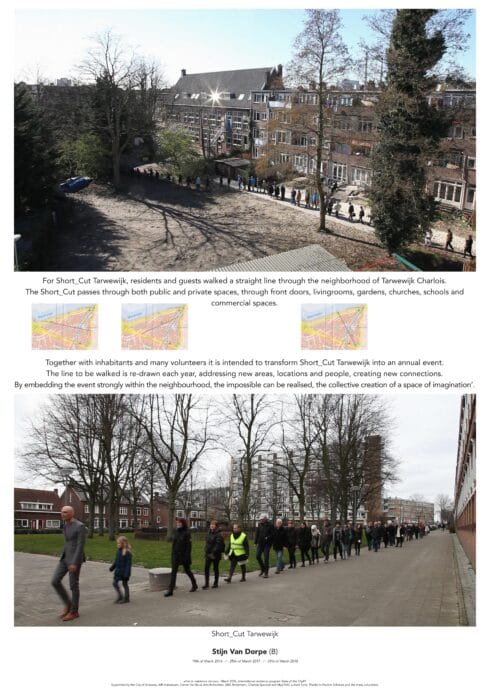 For Short_Cut Tarwewijk, residents and guests walked a straight line through the neighborhood of Tarwewijk Charlois. The Short_Cut passes through both public and private spaces, through front doors, livingrooms, gardens, churches, schools and commercial spaces. Together with inhabitants and many volunteers it is intended to transform Short_Cut Tarwewijk into an annual event. The like to be walked is re-drawn each year, addressing new areas, locations and people, creating new connections. By embedding the event strongly with the neighborhood, the impossible can be realised: the collective creation of a space of imagination. 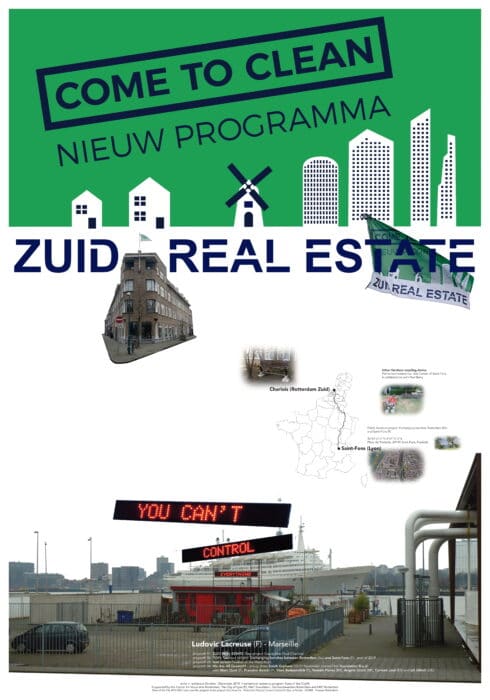 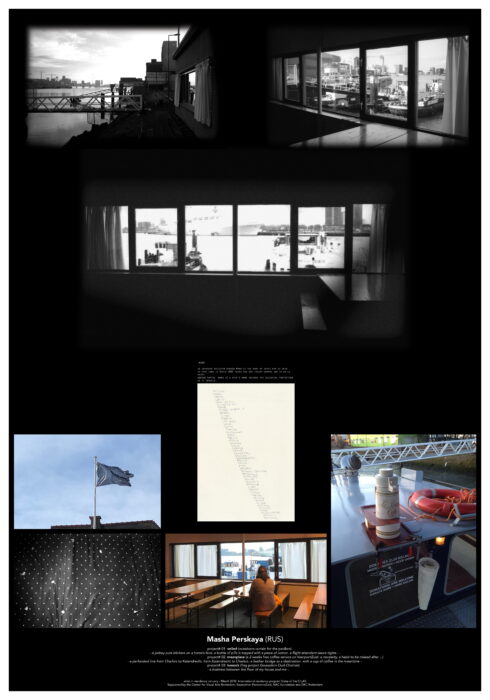 A Jocky puts blinkers on a horse’s face. A bottle of pills is topped with a piece of cotton. A flight attendant wears tights.

Project#-02: meanplace (a 2 weeks free coffee service on VeerpontZuid: a necessity, a habit to be missed after …)

A perforated line from Charlois to Katendrecht, from Katendrecht to Charlois, a feather bridge as a destination. With a cup of coffee in the meantime.

A mattress between the floor of my house and me. 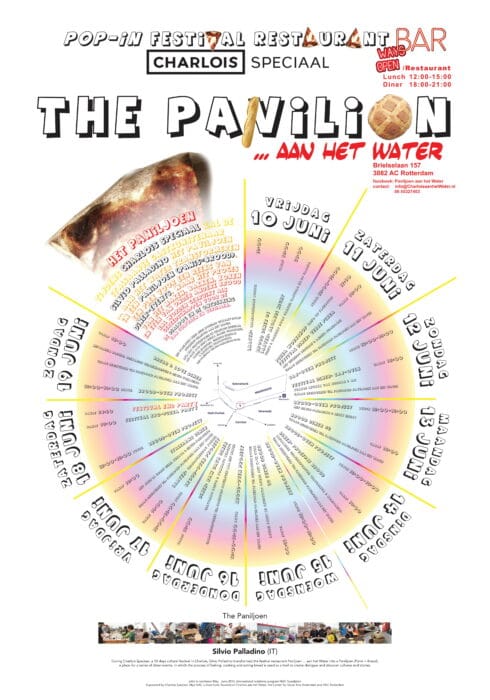 During Charlois Speciaal, a 10 days cultural festival in Charlois, Silvio Palladino transformed the festival restaurant Paviljoen …aan het Water in to a Paniljoen (Panis = Bread), a place for a series of diner-events, in which the process of baking, cooking an eating bread is used as a tool to create dialogue and discover cultures and stories. 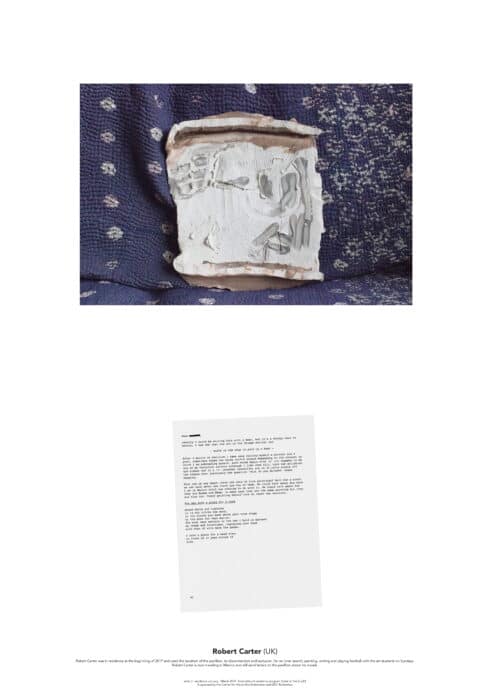 Robert Carter was in residence at the beginning of 2017 and used the isolation of the pavillion, its disconnection and seclusion, for an inner search; painting, writing and playing football with the art students on Sundays. After his residency, Robert Carter travelled in Mexico and sent letters to the pavillion about his travels. 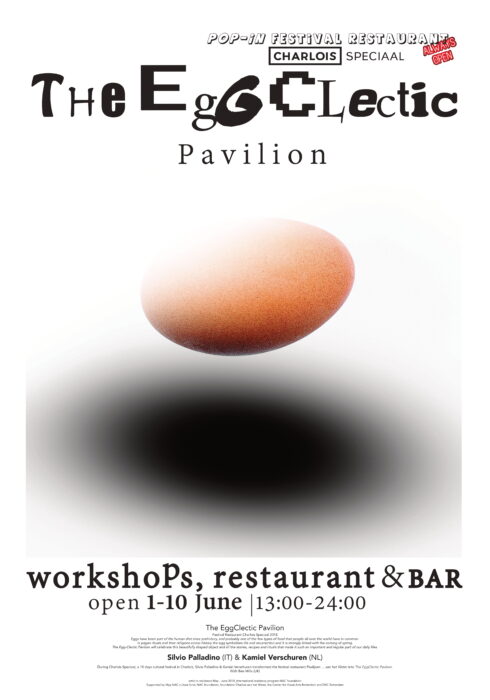 Eggs have been part of the human diet since prehistory, and probably one of he few types of food that people all over the world have in common. In pagan rituals and then religions across history the egg symbolises life and resurrection and it is strongly linked with the coming of spring. The EggClectic Pavilion celebrates this beautifully shaped object and all the stories, recipes and rituals that made it such an important and regular part of our daily lives. 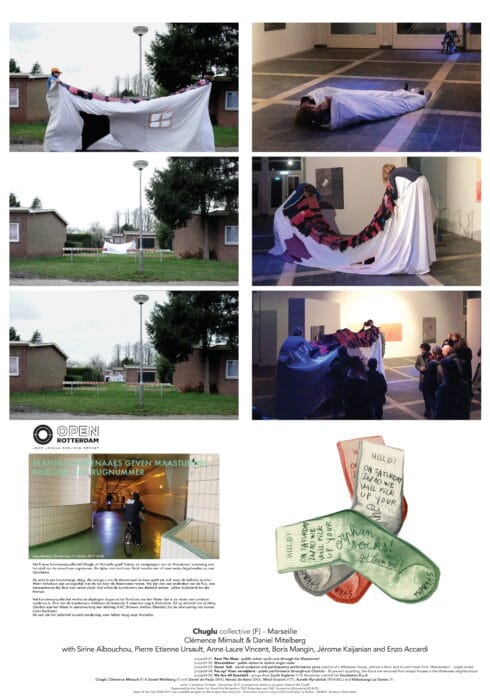 Project#-05: We Are All Guests#3 – group show South Explorer 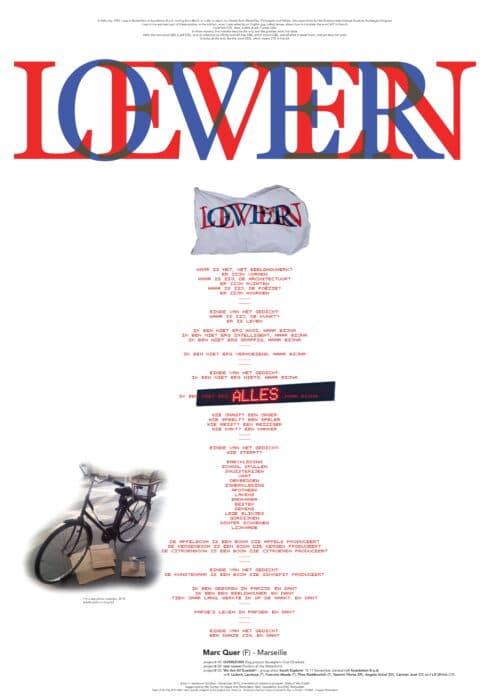 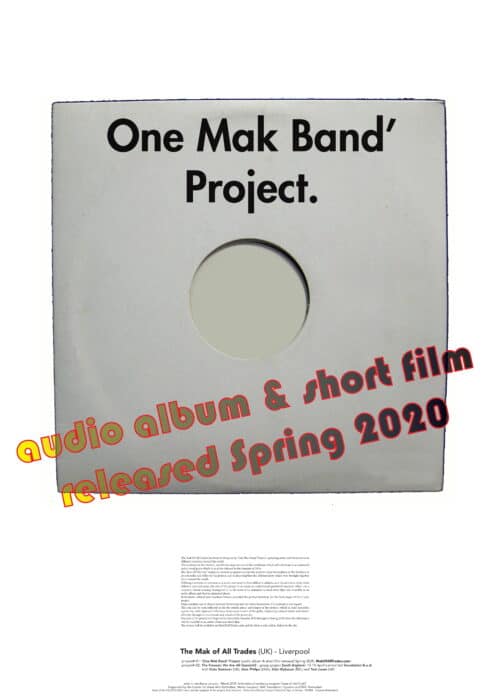 The Mak of All Trades has been working on is One Man Band Project, capturing audio and visual pieces in different locations around the world. The residency in the Pavilion was the last stop on a round the world tour which will culminate in an animated audiovisual piece which was released in the Autumn of 2019. The State of the City residency created an opportunity for the artist to utilise the facilities at the Pavilion to record audio and video for his project, and to piece together the different parts which were brought together from around the world. Utilising a mixture of common and exotic instruments from different cultures, and visual atistic styles from different eras and areas, the aim of the project is to create an audiovisual patchwork tapestry, which has a common thread running throughout it, in the form of an animated musical short film, also available as an audio album and shorter animated pieces. Rotterdam’s cultural and maritime history provided the perfect backdrop for the final stages of this 2 year project. 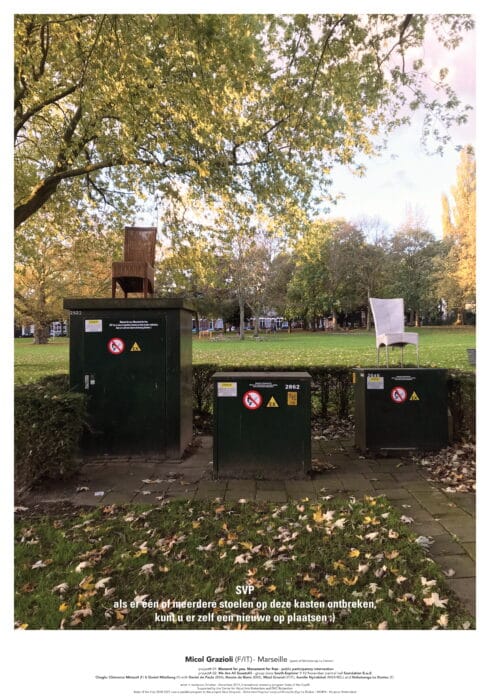 Project#-01: Moment for you. Monument for free – public participatory intervention

Project#-02: We Are All Guests#3 – group show South Explorer with Chuglu collective 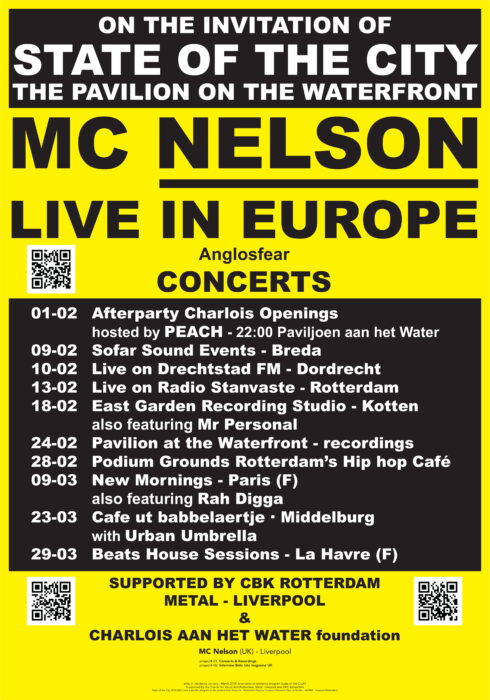 On the invitation of State Of the City: MC Nelson, live in Europe. 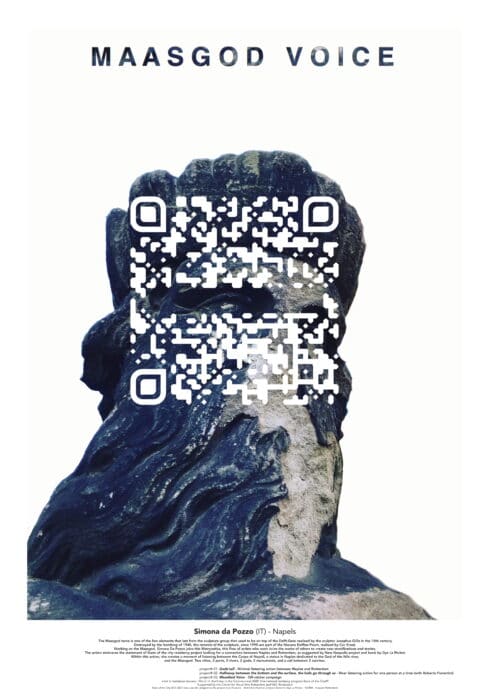 The Maasgod torse is one of the few elements that last from the sculpture group that used to be on top of the Delft-Gate realised by the sculptor Josephus Gillis in the 18th century. Destroyed by the bombing of 1940, the remains of the sculpture, since 1995, are part of the Nieuwe Delftse Poort, realised by Cor Kraat. Working on the Maasgod, Simona Da Pozzo joins this Matryoshka, this flow of artists who work in/on the works of others to create new stratifications and stories. The action embraces the statement of State of the City residency project looking for a connection between Naples and Rotterdam, as suggested by New Neapolis project and book by Gyz La Rivière. Within this action, she creates a moment of listening between the Corpo di Napoli, a statue in Naples dedicated to the God of the Nile river, and the Maasgod. Two cities, 2 ports, 2 rivers, 2 gods, 2 monuments, and a call between 2 sunrises.

Project#-02: Halfaway between the bottom and the surface, the hulls go through us – River listening 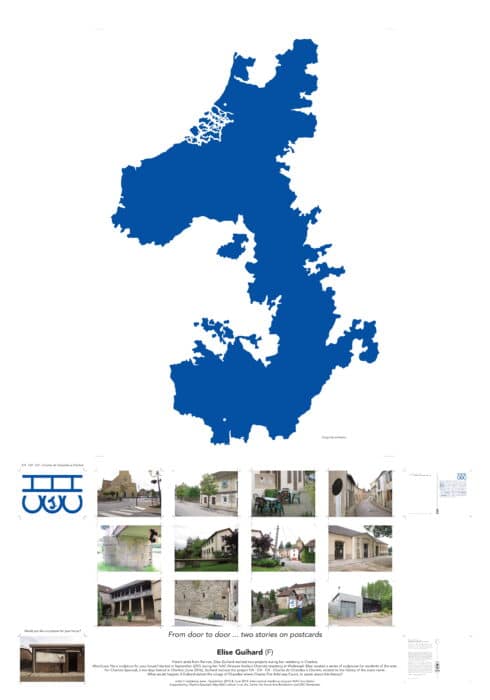 French artist from Rennes, Elise Guihard realised two projects during her residency in Charlois. Would you like a sculpture for your house? started in September 2015 during her NAC (Nieuwe Ateliers Charlois) residency in Wielewaal. Elise created a series of sculptures for residents of the area. For Charlois Speciaal, a ten dat festival in Charlois (June 2016), Guihard realised the project CH – CH – CH – Charles de Charolles à Charlois, related to the history of the area’s name. What would happen if Guihard visited tge village of Charolles where Charloes The Bold was Count, to speak about this history? 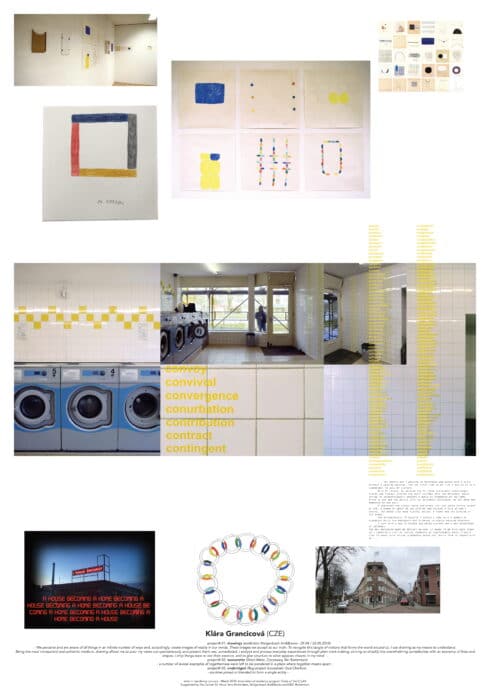 We perceive and are aware of all things in an infinite number of ways and, accordingly, create images of reality in our minds. These images we accept as our truth. To navigate this tangle of notions that forms the world around us, I use drawing as my means to understand. Being the most transparent and authentic medium, drawing allows me to pour my views out spontaneously and present them raw, unmediated. I analyse and process everyday experiences through plain mark-making, striving to simplify the overwhelming complexities with an economy of lines and shapes. I strip things bare to see their essence, and to give structure to what appears chaotic in my mind.

Sundries joined or blended to form a single entity. 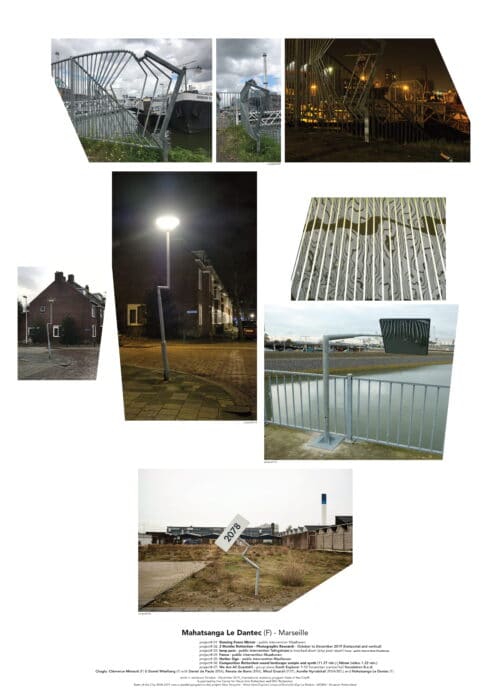 Project#-07: We Are All Guests #3 – group show South Explorer 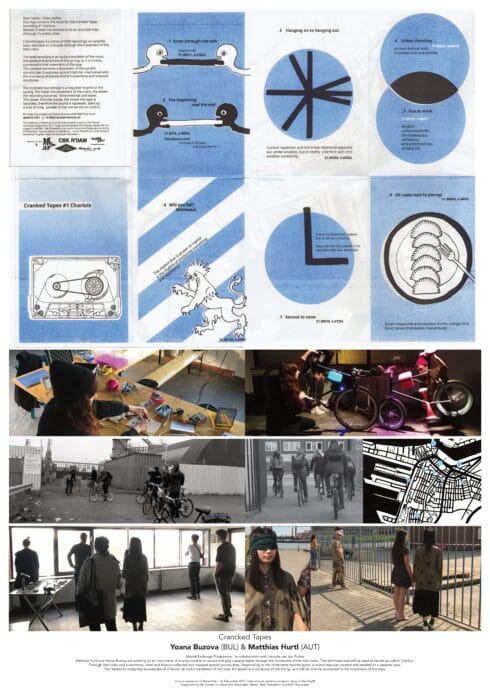 Aloardi Exchange Programme – In collaboration with Janneke van der Putten. Matthias Hurtl and Yoana Buzova worked on an instrument: a bicycle module to record and play cassete tapes through the movement of the bike crank. This self-made tool was used to record sounds in Charlois. Through bike rides and a workshop, Hurtl and Buzova collected and mapped special sounds sites. Responding to the inhabitants favorite sports, a sound map was create and resulted in a cassette tape. They released an imaginary soundscape of Charlois, an audio translation of the map, the speed and dynamics of the biking, as it is directly connected to the movement of the tape. 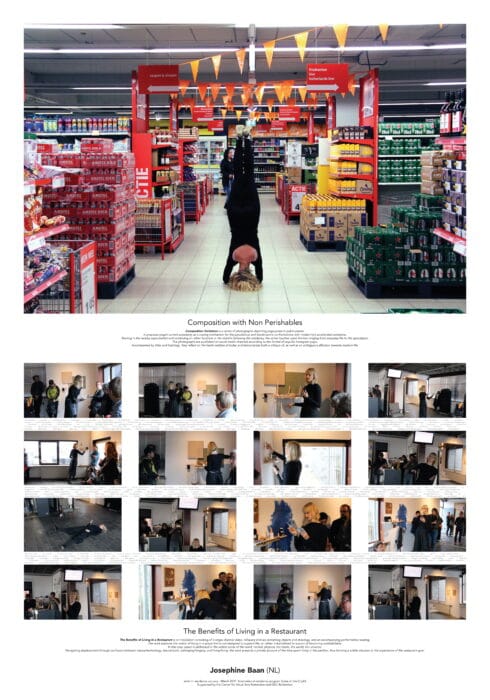 Composition Variations is a series of photographs depicting yoga poses in public spaces. It proposes yoga’s current popularity as a coping of mechanisms for the paradoxical and burdensome confrontations with modernity’s accelerated existence. Starting in the nearby supermarket and continuing on other locations in the months followin the residency, the series touches upon themes ranging from everyday life to the apocalypse.

The Benefits of Living in a Restaurant is an installation consisting of a single channel video, reliquary shelves containing objects and drawings, and an accompanying performative reading. The work explores the notion of living in a space that is not designed to support life, or rather industrialised to a point of becoming uninhabitable. In this case, space is addressed in the widest sense of the word: mental, physical, the home, the world, the universe. Navigating displacement through confusion between nature/technology, leisure/work, belonging/longing, and living/living, the work presents a private account of the time spent living in the pavilion, thus forming a subtle intrusion in the experience in the experience of the restaurant-goer. 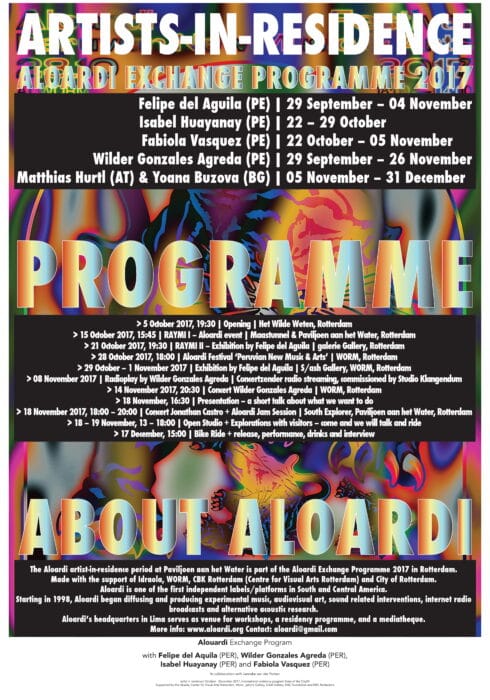 The Aloardi artist-in-residence period at Paviljoen aan het Water is part of the Aloardi Exchange Programme 2017 in Rotterdam. Aloardi is one of the first independent labels/platforms in South and Central America. Starting in 1998, Aloardi began diffusing and producing experimental music, audiovisual art, sound related interventions, internet radio broadcasts and alternative acoustic research. Aloardi’s headquarters in Lima serves as venue for workshops, a residency programme, and a mediatheque. 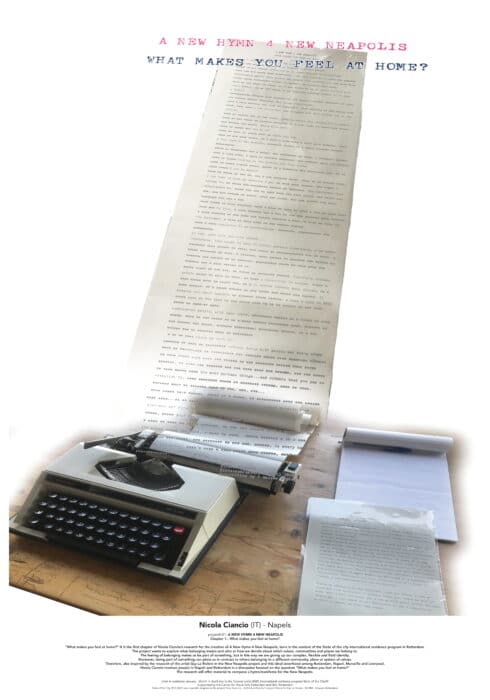 “What makes you feel at home?” It is the first chapter of Nicola Ciancio’s research for the creation of A New Hymn 4 New Neapolis, born in the context of the State of the City international residence program in Rotterdam. The project wants to explore what belonging means and who or how we decide about which values, communities and places we belong to. The feeling of belonging makes us be part of something, but in this way we are giving up our complex, flexible and fluid identity. Moreover, being part of something can place us in contrast to others belonging to a different community, place or system of values. Therefore, also inspired by the research of the artist Gyz La Rivière in the New Neapolis project and this ideal sisterhood among Rotterdam, Napoli, Marseille and Liverpool, Nicola Ciancio involves people in Napoli and Rotterdam in a discussion focused on the question “What makes you feel at home?” The research will offer material to compose a hymn/manifesto for the New Neapolis.

Project#-01: A New Hymn 4 New Neapolis Chapter 1: What makes you feel at home? 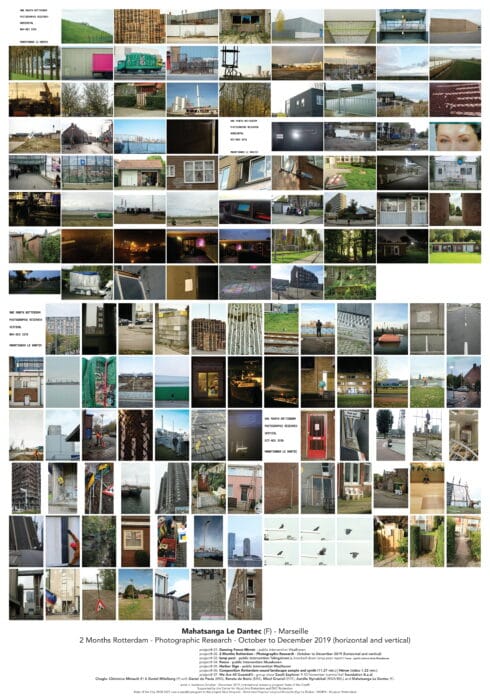 Project#-07: We Are All Guests #3 – group show South Explorer with Chuglu collective